March 16th, 1:30pm is the exact moment I realized how bad the whole situation actually was. My friend called out of nowhere, asking me if I could drive her an hour south where she was checking into a hotel right outside the sheltering counties. She’d be meeting with her out-of-state family and staying with them, but needed someone to drive her to the hotel until they could come west.

Of course, I said yes; she’s one of my closest friends, and I had always offered her the ride if an emergency came up. And I considered this whole thing an emergency.

Other than circumstance, the drive there and eating dinner with her just felt… normal. I go out with her and our partners every so often, so I could pretend it was just another nice outing. But driving back home, alone on 101 at midnight, the dread started to set in. She had just packed up basically all her belongings in her dorm, and was ready to ditch the state. What about me?

​It’s not as though I’m on bad terms with my immediate family; I love my mom and brother, both of which in East Bay. But, I don’t have a room at my mom’s house; it’s been rented out for over a year now. So the only real option I had was to return to my home here in San Jose, where I’ve been waiting since to see what comes next.

My first day really home alone. In this house, I’m usually surrounded by 5 other roommates. Sure, two of them go home for the weekends usually, and the others come and go depending on if they want to visit family, but being entirely home alone brings a weird quiet to the house. I’m a very, very physical person; I don’t really go more than a day without hugging someone or resting my chin on their shoulder, other platonic stuff like that.
​
But now? It’s just me, and my pet rats who, while very friendly, aren’t as affectionate as I need right now.

I had my Zoom “classes” today; a critique on my animation assignment, and an art lecture. Other than the oddity of these classes being forced online, class was honestly the same as always.
​

A very average, very boring day. Is this what’s to come for the next two, three weeks? The days have been blurring together since school came to a screeching halt, and I don’t know what I even do with my time anymore. I must be working on homework, I don’t know how else I’m using up my time.
​
I’m fairly certain I cooked food. Or at least, I know I’ve been eating food. I’ve never been good with keeping eating schedules. Luckily, our house is still pretty stocked with food, and it’s reassuring to know that grocery stores are going to remain open.

Saw an article headline titled “Trump [says] It’s Not Racist To Call Coronavirus The ‘Chinese Virus’” and man, it just… bums me out. I try not to get too into politics because it brings a lot of stress to me, but this whole situation is bad enough; we don’t need the racism added in.

I ordered food today through DoorDash. Just chicken wings, nothing special really. I wasn’t in the mood to cook, and honestly, sometimes when I’m in a really bad mood, I get fast food. It’s not a good habit by any means, but it works and also this whole situation is weird, I should get a pass this once!
​
On a brighter note though, Animal Crossing: New Horizons (a game I’ve been waiting a year for) finally released tonight, so me and almost everyone else I know have been playing it nonstop! And the nice thing is that there’s an online multiplayer feature, so I was able to play with my roommates. I just wish I could play with them in person, y’know?

​Continued playing video games and doing homework, I think? I have no idea. My homework, my personal artwork, and my commission work, I take care of all of that from my desk set-up so it’s a bit hard to remember what I even do throughout the day.

In the evening, my friend hosted a stream of some short films and a movie (Paddington 2, which was very goofy and cute), so me and some of our friends watched while we were on call. It was honestly really, really fun. I’m not too big on casual phone calls (especially group calls), but it was really nice.

I just really miss being around people. I understand the importance of all of this, but what I wouldn’t do just to see one of my friends again.

I don’t know what it is about today in particular that made me so antsy, but I suddenly just really wanted fresh air. Maybe it’s because looking at the step log on my watch made me realize how little I’ve moved in the last few days, but I decided to go on a quick walk in the back neighborhoods, just to get out for a bit.

There were very few people, and while I’m glad (being as that people shouldn’t really be outside anyways), it was still scary to me. I’m so used to these streets being filled with traffic, so seeing them barren makes me feel… I don’t know, empty?

Pandemic aside, the other thing on my mind is one of my rat’s health. She’s had a (benign) tumor on her side for over a week now, and while she’s not in pain, it’s getting bigger. I’m debating on if I should take her to the vet again to consider options, but the problem is, I hate going to the vet alone. I always, always go with a friend in case worst comes to worst and I need comfort. I really don’t want to have to go alone, but it’s also one of those things where I don’t know if I can put it off for too long.

So I'll admit, I'm bad at doing my laundry on a consistent schedule. That doesn't mean I'm gross and I'm wearing dirty clothes or anything by the way!! I just wear all my clean clothes until I run out, and then I have to do laundry so I can get my comfy pajamas back.

​So yeah. That was the big event of today.

I think that's the only way I can differentiate between different days now. Like, Monday? Thursday? Those words mean nothing to me anymore! I don't mean that in a nihilistic, apathetic way, just in a "I am just a very confused sleepy person" way.

I went to pick up food at a local place today (The Corner on 10th street, to be exact) because their food is good and the workers there are nice! The woman at the counter seemed really tired, and the place was so quiet I felt bad so I tipped a bit extra.

On the way home, some guy sitting on the sidewalk kinda got me attention by saying "Where you going young lady?" so I kinda' just smiled and said something meaningless about how I'm going to eat, and in response, he yelled at me all the way down the block. I don't know exactly what he said, but please understand that I was TERRIFIED. I don't think it was related to all the going-ons, but I usually don't like walking alone around this area anyways, so there goes... any chance of me walking out on the streets again until I'm back with my roommates.

Had class today, just two different calls on Zoom. ​It was fine I guess.

That's the problem, I feel like a lot of my days are just "fine I guess". I've had depression since high school, and my association with "neutral" or "fine" days is that it leads to "bad" or "horrible" days. At least, if I have a bad day, I can usually tell why it's a bad day, y'know?

Instead, everything just blurs together until I can't differentiate days, events, times, and so forth. I eat, I sleep, I play video games. What else is there to do?

Finished up the last of my homework before break today. Even though I do have a call for class tomorrow, it's more of a presentation than a lecture, so really, I'm done with school before break.

I should be more excited ("SPRING BREAK WOO!!!"), but honestly, it doesn't feel any different than before. I'm still going to sit at home behind my laptop, it's just now I don't have to worry about school for like a week, I guess haha.

I'd love to continue keeping up this journal, but honestly, I don't know how much "interesting" stuff will happen in the next few days, so who knows if it'll even be worth it?

Regardless, I decided to write a stupid cheesy poem on our whiteboard. Me and my roommates, we have these little poetry magnets which we usually use to write very.... inappropriate poems, but since no one else is home, I might as well write something nice for once. 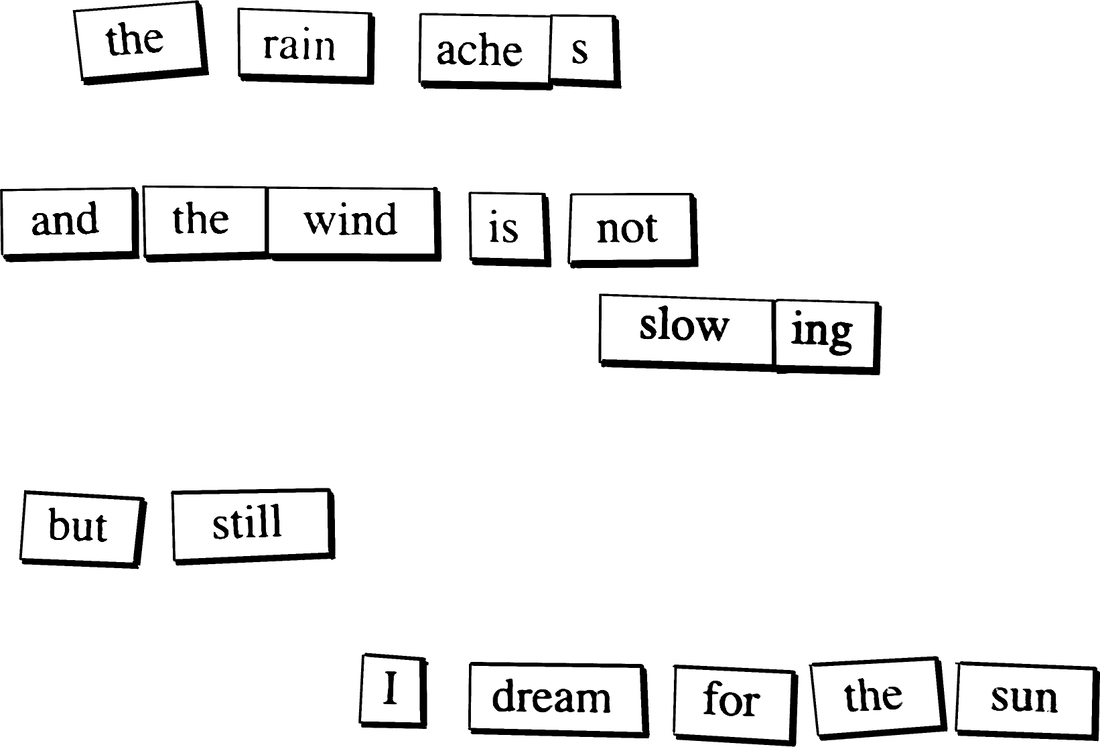